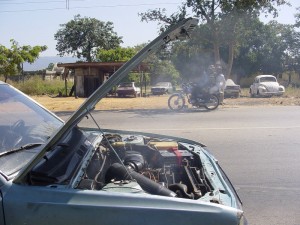 Engine overheating generally serves as an indicative of other problems in the car, such as the decrease of coolant level due to leakage, a stuck closed thermostat, a broken cooling fan or a blocked radiator. Irrespective of the reason behind the overheating problems, the car should be necessarily turned off before the car does any damage at all. Consequently, the following steps should be followed: